For those who don’t know, Twigby’s longstanding network partner was Sprint. Sprint however informed us that they would be shutting down their network by the end of December 2021. With that, we had no other choice but to find another suitor for our customers. We wanted to give our customers the most value for their dollar. That is why we worked tirelessly to strike a deal with the nation’s largest and most reliable network. Sprint did inform us at a later time that they had extended our access until March 30th. This will be the final date.

Who is this mystery network partner?

You may be wondering “why do they not say the name of the network partner?”. That is a fair question. To be honest, contractually we cannot publicize their name. Many would assume this is because they do not want everyone to know that you can get their coverage at a much lower price outside of their retail stores. With this, we must adhere to the agreement in place and not speak to their name. Yet rest assured, it is the nation’s largest most reliable network.

Is the new network that Twigby uses REALLY the best in the nation?

Twigby’s new network partner is known for being consistently rated the highest in coverage, speed, and overall reliability. According to JD Power, a research firm that analyzes consumer data to produce rankings, reviews, and reports, the network ranks highest in their studies – achieving the fewest network quality problems in call quality, messaging quality, and data quality. The network has also received the highest number of JD Power awards in network quality compared to other providers.

You’re still probably wondering if Twigby’s new network is actually the nation’s largest and most reliable network, as claimed. Let us break it down for you a bit more.

The reliable coverage is one of the main reasons people choose this network. Covering 70% of the United States with 4G LTE, Twigby’s new network partner comes out on top. AT&T follows with 68% and T-Mobile with just 62%. The difference in coverage percentage may not sound like a huge difference but it can have a real impact in rural areas. Don’t take our word for it? The FCC created a coverage map using real data. Check it out for yourself here to see the differences in coverage across the U.S. You’ll notice that Twigby is now using the carrier that shows the most coverage throughout the United States.

Fastest Speeds in the Country

Who says you have to compromise data speed for great coverage? Not at Twigby, not when we’re covered by the nation’s best network. Slow data speeds can interrupt your navigation to your next stop during a busy day, Facetime calls, etc. According to RootMetrics, the network’s data speeds has come out on top for 16 consecutive semiannual reports. This includes the first half of 2021.

Worried about 5G? Don’t be

T-Mobile claims that they are the largest 5G network and we were excited to test their network. However, we found that our customers would lose a good chunk of coverage on a nationwide basis. 5G is still a work in progress. 5G still needs time to expand across the country to become available to everyone. The only real advantage to 5G is speed, which could lead to higher cell phone bills as they use more data. Until then, 4G is what matters and it still provides ample speed.

Our new carrier partner has the best 4G network, and it’s building 5G to be just as good. 5G sounds cool, but we don’t know when you’ll really need it. Overall, 5G is bit more hype at the present time.

What our Customers Think of our New Network

There is much to be loved about the new network. However, we think it’s best if you heard it from fellow Twigby customers instead of us. These customer’s previously used Sprint’s network and were kind enough to take a survey letting us know their thoughts on the new network. Click here to see what other customers think of the new network.

Twigby’s new carrier partner continues to prove it’s the best in overall performance, network reliability, and call performance. RootMetrics findings help confirm this. We know getting the best network can come with a hefty price, but not at Twigby. With our new network and pricing combined, Twigby provides the best value in wireless. Get great reliability, strong speeds, and rapid 5G expansion – all at an affordable price from Twigby. 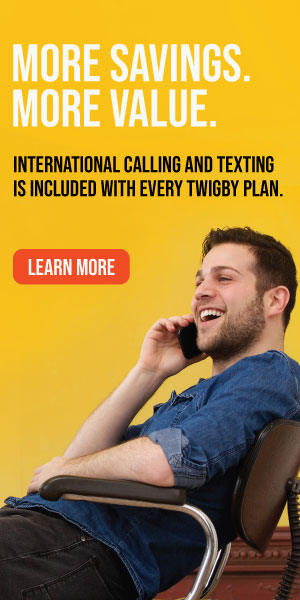